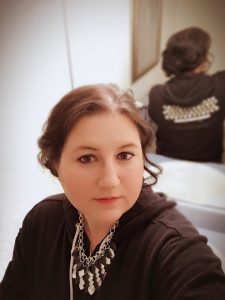 Born in 1982 in Rhode Island, Lyndsey’s parents encouraged her at an early age to love reading. By the time she entered grade five, she’d already read most of Terry Brooks’ Shannara Series and all three volumes of The Lord of the Rings.

Inspired by the authors she loved, she tried her hand at writing her own fantasy literature in Middle and High School, but readily admits that these early works were derivative and not worth the time it would take to read them.

After graduating High School, Lyndsey enrolled at Rivier College in Nashua, New Hampshire, where she earned a Bachelor of Arts degree in English Literature with a double minor in Creative Writing and Studio Art.

While in college, she finished her first full-length fantasy novel. Since graduating, she has completed three more novels, several short stories, and been a beta and gamma reader for several well-known fantasy novels.

She currently resides in Connecticut, where she lives with her husband Joe and dogs Oy & Castiel. When not writing or reading, she works as a professional actress and stage combatant at several New England Renaissance Faires, volunteers her time to help organize local fan conventions, fire-spins, and cosplays.