Well, here goes. The Forgotten Soldier has been submitted. Hitting the “send” button on any submission is hard, but this one was harder than any I’ve done so far.

This book is my darling. My Dark Tower. My Stormlight Archive. It represents 14 years of rewrites and revisions, building this story up from what started out as a simple retelling of a D&D campaign. I’ve torn it all down and rebuilt from the ground up so many times now that only the barest bones of what I started with remain. The initial drafts were completely different books, save for some shared names and one big event that has never been cut.

I know this world better, in some ways, than the real one. I know about its trade agreements and economics. I learned some basic physics in the process of building the magic system and studied the psychology of PTSD and repressed memories. I know its history, its legends, its games and plays and the divinities working behind the scenes both worshipped and forgotten. I constructed languages and laws and drafted maps and created just about anything else you can imagine, but for me, the most important part will always be the characters.

I love these people as if they were real. I weep with them when they fail and cheer when they prevail. I know them inside and out, but they still manage to surprise me sometimes as little bits of their past or personalities swim up from some unconscious well of knowledge buried in my brain. I’ve spent more time with them than almost anyone I know in my life, including my husband. They’re a part of me, and they always will be. I want others to get to know them, to love them as I do. I want them to help others as they’ve helped me.

The book’s in the hands of an agent now, an agent I adore and whose opinion I trust. She made some of the best revision suggestions I’ve ever received on the last novel I submitted, and her enthusiasm was a boon to me when I first decided to take this seriously four years ago. I’ve come a long way since she last read my work, so I’m hoping that I’ve improved enough and that this project excites her enough to want to be involved. In a way, it’s like handing a newborn to a stranger and standing there wringing your hands, praying they know to support the neck and don’t drop it.

Wish me luck, guys. I am terrified and excited and nervous and everything in between.

In addition to this, Greencloak is still out on submission to TOR. I don’t expect to hear anything back on that for several months yet. I’m also anxiously awaiting word on the short story anthology I submitted to – they should be replying in the next ten days.

While I wait, I thought I’d share a few things I found in my last hectic revision pass of Forgotten Soldier that made me laugh. These are mostly notes from my writing group.

(For those not in the know, this character is very, very gay.) I wound up having to cut this section, but Meg’s comment was too funny not to save.

And finally, one of my favorite comments, again from a beta reader. This one never ceases to make me laugh. There is no greater compliment than a comment like this about one of your characters. 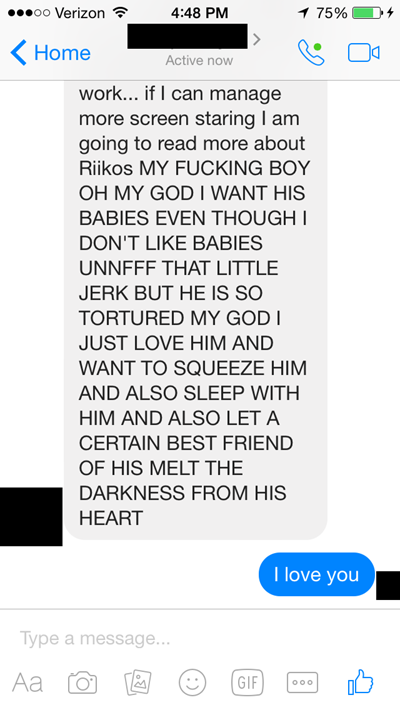